This article presents a geometrical analysis of Bourges Cathedral, based on the application of computer-aided design (CAD) techniques to the results of a recent and highly precise laser survey. This analysis reveals that the cathedral's original designer developed a tightly interlocking and strikingly unified design, in which the five-fold subdivision of the chevet ground plan set proportions that would be vertically extruded into an elevation that can be inscribed both within a square and within a series of progessively smaller equilaterial triangles. These results contribute to an ongoing debate about the use of ‘ad quadratum’ and ‘ad triangulum’ geometries in Gothic architecture, and they provide new evidence for the geometrical coherence of Gothic cathedral design. In methodological terms, meanwhile, this discussion demonstrates the potential of CAD-based geometrical analysis for the study of precisely surveyed medieval buildings.

The sequence of images being analysed can be viewed as supplementary material at: http://dx.doi.org/10.5334/ah.bz.s1

The following geometrical analysis of Bourges Cathedral can be read as a complement of sorts to the articles that grew out of the 2011 Leiden conference on architectural proportion. For the decade prior to that conference, I had been using computer-aided design (CAD) software to study the proportions of Gothic architectural drawings. As my paper for the conference explains, and as my book The Geometry of Creation explains in greater detail, drawings are excellent subjects for such study, in part because their proportions can be measured more readily than those of actual buildings (Bork 2014a; Bork 2011). Because original design drawings survive for only a small sample of Gothic buildings, however, it is fortunate that architectural surveying has been transformed recently by the emergence of photogrammetric and laser-scanning techniques. At the Leiden conference, Andrew Tallon presented stunningly detailed scans of Bourges Cathedral and Notre-Dame in Paris, two of the most impressive Gothic cathedrals of the late twelfth century, showing precisely the dimensions of the concentric circles around which their chevet plans were developed. Since such data can provide excellent raw material for the kind of CAD-based geometrical analysis that I had previously undertaken with drawings, I was most grateful when Tallon agreed to share some of his data with me after the conference. My first goal was to try to understand the plan of Notre-Dame, the older of the two buildings.1 Subsequently, I went on to consider the plan and elevation of Bourges, as the following paragraphs will explain (see Supplementary material 1 to view the images). 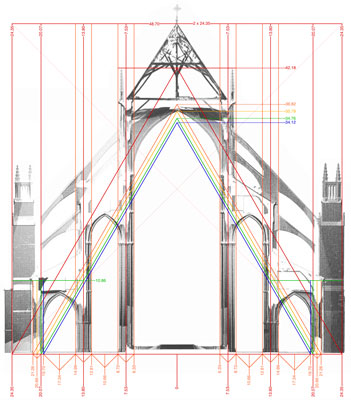 Example (slide 15) of the graphics used for the geometrical analysis of Bourges Cathedral. For the complete set of images, access

I had expected that Bourges would offer a particularly rich subject for geometrical and proportional analysis, for two main reasons. First, the cathedral has an intriguing and very unusual design, since it lacks a transept, and since its five aisles are staggered in height, creating a cross section whose roughly triangular outline is emphasized by the steep slope of its flying buttresses. Second, the cathedral ranks as one of the largest Gothic structures in which the fabric produced in the first building campaign survives substantially unaltered by later modifications and accretions.2 In the case of Bourges, therefore, the quality of Tallon’s data permits the rigorous testing of hypotheses about the original intentions of a major cathedral designer. This is a crucial point because, as I explain in my main article from the Leiden conference, geometrical research into medieval architectural design has often been disparaged for its lack of rigor and reliability.3 More importantly, perhaps, this distrust of the literature on medieval geometry has led many scholars to conclude either that Gothic builders lacked coherent design principles, or that those principles could not be reliably recovered by modern researchers. My studies over the past decade have convinced me that, on the contrary, the geometrical principles of Gothic builders can, in fact, be rigorously explored. My analysis of Bourges, in particular, shows that the designer managed to combine multiple geometrical systems ingeniously: from a plan based on the five-fold subdivision of the east end he developed an elevation incorporating the geometries of both the square and the equilateral triangle. More precisely, the height of the main vaults derives from the triangular system, while the total section of the building, including its timber roof, neatly fills a square frame around its buttresses. In addition, these systems help to explain not only the overall format of the Bourges section, but also its details. I hope that these results, together with my previous work on Gothic drawings, will encourage more scholars to see the value of rigorous research into the geometrical principles of Gothic design.

My analysis of Bourges has given me a fresh perspective on many of the topics discussed by my fellow medievalists at the Leiden conference, and on my own work as well. Most immediately, of course, my analysis builds on the work of Andrew Tallon, underscoring the value of the exacting survey work that he has undertaken in recent years (Tallon 2014). My approach to the Bourges analysis, and my approach to Gothic design in general, has been strongly informed by the work of Stephen Murray, with whom both Tallon and I studied (Murray 1990; Murray 2014). I therefore find it exciting that all three of us have been grappling in our respective articles with the use of the equilateral triangle as a proportioning figure in the design of Gothic church sections, a topic whose complex historiography goes back at least to circa 1400 and the debates about Milan Cathedral that James Ackerman discussed in his 1949 article ‘Ars Sine Scientia Nihil Est’ (Ackerman 1949). In this connection, my Bourges analysis has given me new insight not only into the ‘ad triangulum’ geometrical scheme, but also into the ways in which it could be combined with the geometry of other figures, including the square, the pentagon, and the octagon. These findings, in turn, have increased my interest in medieval architectural numerology, a topic discussed at Leiden and in the present special collection by Elizabeth den Hartog (Hartog 2014). The case of Bourges also offers a valuable perspective on Marvin Trachtenberg’s argument about the pre-Renaissance practice of ‘building-in-time’ (Trachtenberg 2010; Trachtenberg 2014). While the design of the cathedral was certainly modified during construction, in accord with this paradigm, the precision of the first campaign, which Tallon’s survey permits one to appreciate, shows that the original designer intended to fix the shape of the building in a rigorous and global fashion.4 Interestingly, too, my analyses of Bourges, Notre-Dame, and Saint-Denis demonstrate that the designers of these three 12th-century buildings used not only the axes of their piers, but also their plinths, as important geometrical fixed points, a result that ties in closely to Matthew Cohen’s discussion of plinth-to-plinth measurement in Florence’s cathedral of Santa Maria del Fiore and in Brunelleschi’s 15th-century basilicas.5 My analysis of Bourges also provides an early example of the Gothic design strategy in which the proportions of the elevation would develop from those established in the ground plan, a strategy also seen in the 16th-century tabernacle scheme discussed by Krista De Jonge, and in the Ulm and Freiburg tower designs that I discussed at Leiden (De Jonge 2014; Bork 2014a). My work on Bourges has also suggested to me the tantalizing possibility that the original designer’s consideration of early schemes for the cathedral’s elevation may have motivated slight changes to the ground plan, which in turn went on to influence the current elevation.

To put this analysis into context, it will be helpful to make a few brief observations about the literature on proportioning figures in Gothic elevation design. Early in the debates on Milan Cathedral, a basic question was whether the elevation of the church should be inscribed in a square or within the lower figure of an equilateral triangle. This distinction certainly mattered for the planning of the building, but it is important to note that ‘ad quadratum’ and ‘ad triangulum’ schemes could be applied in various ways, and even in some respects reconciled with each other, as the case of Bourges will demonstrate. At Milan, moreover, the rejection of the square option did not end the debate about how the triangle scheme should be applied. Ackerman’s article has introduced many students of medieval architecture to the fact that the mathematician Stornaloco recommended a clever modular approximation to the equilateral triangle scheme, which the local builders ultimately rejected in favor of an even lower format based on 3–4–5 right triangles.6 Despite this turn of events, Cesariano included a version of Milan Cathedral conforming perfectly to an equilateral triangular scheme in his influential 1521 version of Vitruvius’s De architectura (Cesariano 1521). Nineteenth-century scholars, including Viollet-le-Duc and Georg Dehio, moreover, believed that equilateral schemes of this general type governed the section designs of many medieval churches (Viollet-le-Duc 1858–68; Dehio and Bezold 1894). In the past century these views have frequently been dismissed or criticized, partly because really precise building surveys have been hard to come by, but recent studies of both buildings and medieval design drawings suggest that elevation schemes based on the equilateral triangle were, indeed, used by many medieval designers.7

The following analysis of the Bourges choir design will demonstrate an important feature of the Gothic design process: namely, the way in which dynamical schemes of geometrical unfolding could develop even within the seemingly rigid frames of basic geometrical figures like the circle, square, and equilateral triangle. So, while these figures were commonly used in the steps of the Gothic design process, Gothic buildings tend to differ widely in the proportions of their respective elements, with little of the convergence to canonical proportions seen in classical design.8 As the final section of this analysis will show, though, the designer of the Bourges choir may have been an early adopter of an octagon-based proportioning scheme previously explored at Notre-Dame in Paris, which would be seen in many later medieval churches, including the cathedrals of Reims, Clermont-Ferrand, Prague, and Aachen.9

Because of the dynamically unfolding nature of the Gothic design process, a fruitful strategy in the analysis of Gothic proportions can be to develop trial sequences of geometrical operations that generate forms matching those seen in the building, or in the associated design drawings. The following analysis of the Bourges choir, like the other such analyses I have undertaken, was developed in that manner. This approach may appear convoluted when compared to simple design strategies like inscribing a building elevation within a square or an equilateral triangle, but the relationship of the building components to those simple schemes only becomes clear when the details are taken into account. These are precisely the qualities that give the buildings their individual flavor. Gothic cathedrals, after all, deserve line-by-line scrutiny as much as literary texts. I thus hope that the following step-by-step analysis of the Bourges choir will help to shed some light on the particular artistic personality of the cathedral’s first designer, as well as on the nature of Gothic design practice as a whole.

Please visit the following link to view the supplementary material:

R Bork, (2011).  The Geometry of Creation: Architectural Drawing and the Dynamics of Gothic Design. Farnham: Ashgate.

M Cohen, (2008).  How Much Brunelleschi? A Late Medieval Proportional System in the Basilica of San Lorenzo in Florence.  Journal of the Society of Architectural Historians 67 (1) : 18.

M Cohen, (2014a).  Beyond Beauty: Reexamining Architectural Proportion through the Basilicas of San Lorenzo and Santo Spirito in Florence. Venice: Marsilio.

M Trachtenberg, (2014).  To Build Proportions in Time, or Tie Knots in Space? A Reassessment of the Renaissance Turn in Architectural Proportions.  Architectural Histories 2 (1) : 13. DOI: http://dx.doi.org/10.5334/ah.bp

Robert Bork (The University of Iowa)