Scandinavia has long held a special place in the history of Modernist architecture, particularly with the gradual ascendancy of Alvar Aalto, whose work remains inspirational world-wide and continues to unfold riches. Behind Aalto, and probably the greatest influence on him, was his friend Gunnar Asplund, generally acknowledged as author of the modernist breakthrough in Scandinavia with the Stockholm Exhibition of 1930. Asplund was a precise contemporary of Le Corbusier, born in 1885. Had he lived beyond 1940 he would certainly have produced more work and gained a higher place in the canon, but even so his world-famous work in partnership with Sigurd Lewerentz (also b. 1885) on Stockholm’s Woodland Cemetery has long been celebrated as a landscape highpoint of the twentieth century. Pevsner praised it and gave it one of the few plates in late editions of his Outline,1 although giving its architects no significant place in his history. Unusually, the project had developed over 25 years, for Asplund and Lewerentz won the competition in 1915. Showing an extraordinary commitment to the givens of the site, they produced a radically irregular plan in contrast with the monumental proposals of others. Version after version followed as they developed it, taking turns with designs for chapels. By the early 1920s a greater formality was imposed only to be loosened again, but in this drawing board game already realised moves could not be reversed. Arguably it was the stops and starts, changes of interpretation, bringing of new ideas, and the dialogue between the two talented creators and their client body that produced such an intricate layered landscape. Not everything ran smoothly, for Lewerentz irritated the cemetery authority with his lateness and indecision, and in 1933 Asplund was asked to continue alone, bringing work to a stunning conclusion with his crematorium portico, nicely balanced against Lewerentz’s resurrection grove. For decades following, perhaps because of the visual impact of the final chapel, the cemetery was attributed to Asplund, while Lewerentz languished in obscurity, having almost dropped out of architecture, but he lived on to the age of 90, reinventing himself in two late churches which could be considered the last word in Brutalism.2

Lewerentz’s story was reassembled in the 1980s by Janne Ahlin, who published a monograph documenting many previously unseen buildings and projects. Long out of print, it has now been reissued in facsimile like a historic document, the only additions being an updated work list and a short terminal essay by Wilfried Wang, instigator also of other Lewerentz publications.3 Further understanding of the Woodland Cemetery later came with Caroline Constant’s eponymous book of 1994, which also addressed the vexed question of who was responsible for what.4 Opinion swung for a while in favour of Lewerentz, but in my view it is unproductive to take sides. If the gradual evolution of the work contributed to its subtlety, it was also unusual for such a long-running project not to fall victim to cuts and compromise, even total cancellation. This reflected a special condition in Sweden and respect for long-term commitment, also the fact that architects were then a small and elite body. Even the largest cities remained recognisable landscapes to be set off by focal monuments, and Asplund and Lewerentz grew up under teachers from the previous generation who won project after project for major monuments: town halls, churches, law-courts, museums.5 Therefore they could almost expect to undertake such things themselves.

Nicholas Adams’s book concerns the other great long-running project undertaken by Asplund alone, the Gothenburg Law Courts extension won in a competition of 1913 but not completed until 1937. Although overtly an extension, it did involve the reworking of an entire old building situated at the very heart of Sweden’s second city (Fig. 1). Its main façade was offered to the city’s focal point, Gustaf Adolf Square, and Asplund’s work came also to include general proposals for the square and other adjacent buildings. From the start the main difficulties with the law court were the asymmetrical placing of the old building and the choice whether to address the square or the grand canal to the side: Tessin, architect of the original building from 1672, had produced a Janus-like double front. Asplund won the original competition with a version that solved the plan brilliantly by addressing the canal but failed to answer to the square, then he struggled to solve this conundrum in numerous versions over a dozen years, eventually opting in the extension to mimic the facade of the old building. In 1925 funds dried up and the project died, but it was taken up again in 1934 with the advent of social democracy, funded by a Keynesian bid to stimulate the economy. Asplund, having launched his modernist wave, naturally felt a need to rework the project, resulting in the most subtle modernist interior in Sweden. As for the façade, in a bid to declare some modernity, he picked up the rustication, entablature, horizontals and proportions of the old building, but pilasters became exposed frame, entry was for good reasons denied, and windows were shifted sideways in their bays in deference to the old entrance. Nowadays this is widely regarded as the best piece of ‘new and old’ anywhere before the Second World War, but when the scaffolding was struck in 1936 it was condemned as a scandal.6 Asplund was pilloried for years in the press, and the stress probably contributed to his heart problems and early death. 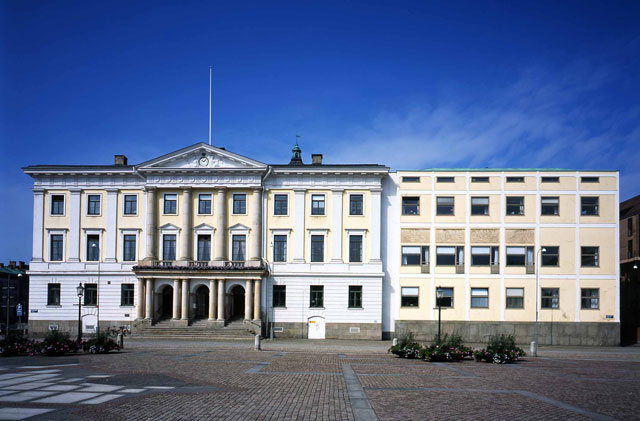 The original Law Courts building at Gothenburg by Nicodemus Tessin the Younger (1672), with on the right side Gunnar Asplund’s extension (1934-1937). Photo: Peter Blundell Jones.

Adams became fascinated with the question of why the building had been so unfavourably received, and in a long and detailed chapter he explores the press reaction and the persons behind it. Responsibility rests particularly with a local arts official and the editor of a respected paper, but comparing architecture’s coverage with much better expert attention given to music, Adams demonstrates the dearth of properly informed architectural criticism in Sweden at the time, particularly in Gothenburg. The kneejerk chorus of disdain over Asplund’s façade drowned out every opportunity for real debate, one paper even mischievously ridiculing the building by claiming an assistant had posted the plan upside down, cellar windows being found in the attic. One can only imagine Asplund’s frustration with people who stood outside calling for a door that ‘ought to be’ without the slightest idea of what went on inside, after he had wrestled with the question for 25 years. This chapter is a model case-study, well-researched, coherently written, and suggestive for other case studies about buildings’ reputations and the framing of criticism.

But this is not the first chapter: the book starts on a different but equally valuable tack tracing the history and evolution of Gothenburg as a relatively young mercantile city, and focusing on the role of Gustaf Adolf Square as main square with the development of representative buildings around it, particularly those concerned with administration and the law. Adams brings in much relevant social history, including the changing meaning of the Gustaf Adolf myth and the celebration of his anniversary, so we see the square and its architecture as part of an invented and evolving tradition to which Asplund was obliged to contribute. Adams also explores the political situation and the changes after the social democrats took over in 1932, including some detail on the evolving practices of the law. He shows how the building was not only the result of political changes through its funding, but also in the changed way the law was enacted and implemented, providing further detailed evidence of Asplund’s social and egalitarian concerns, and showing the efficacy of architecture in leading social change. Pertinent contrasts with works under Fascist regimes elsewhere in Europe underline the point.

Over another couple of chapters relating to the book’s subtitle, ‘the transformation of public architecture in interwar Europe’, Adams undertakes a fascinating survey of law courts and town halls across the continent, which could surely be the starting point for a useful history of the building type. But the field is too large, and the compulsion for brevity restricts the discussion largely to issues of style, with illustrations that are nearly all façades. Adams also succumbs to the temptation to spot things that ‘might’ have influenced Asplund at a late stage; but just to take one: example did the architect really know about Garnier’s law court in Boulogne Billancourt, and even if he did, was anything taken from it? Asplund was not a copyist, and he forbad his staff to crib or even look at details from his own earlier works. Furthermore, in the rare case when he admitted an influence, like Liselund on the Woodland Chapel, he transformed it almost beyond recognition, borrowing something of the Danish work’s charm and small scale but creating quite a different feel. Asplund’s range of references was enormous, but his finger was on the pulse of something much deeper than a lazy eclecticism, with a sensibility that transcends from pre-modern to modern work and merits further exploration. With the Law Courts extension it was precisely the need to reflect the transformation of social processes inside as well as respecting history outside that produced such a remarkable hybrid face. Adams has given us a serious and well-researched book with much valuable translation from the Swedish and a welcome emphasis on social and political history.

The author declares that they have no competing interests.

This article has not been peer reviewed.