As the title of this volume of eleven articles and an introduction suggests, Early Modern Urbanism and the Grid: Town Planning in the Low Countries in International Context is about the significance of the grid in early modern urbanism.

As the title of this volume of eleven articles and an introduction suggests, Early Modern Urbanism and the Grid: Town Planning in the Low Countries in International Context is about the significance of the grid in early modern urbanism. A clear definition of the grid, or an etymological explanation of the term, is lacking, however, as is an equivalent in the dominant languages of communication in the early modern Netherlands discussed. The concept of the grid, and even the word itself, is as alien to the early modern Netherlands as are the twentieth-century uses associated with it. Thus the problems encountered by the organizers of the international symposium held at the Faculty of Design Sciences of the University of Antwerp in 2009, on which this volume is based, are not resolved in this tenth volume of the Brepols series Architectura Moderna. In this book the grid is considered as a system for ordering reality that is built upon the positivist assumption that chaos and disorder can be mastered through the use of geometry and the practice of measuring. For the editors of this volume, the grid is primarily a geometrical form which surfaced in the early modern Netherlands and which turned out to be an influential device or scheme to organize space and to implement in the planning of urban areas. The assumption that this system could be a universal tool free of value, however, is contradicted by most of the articles that follow. The very concept of the grid is imbued with meaning and beliefs in terms of knowledge, politics, society, and human behaviour. Despite the fact that the term remains imprecise, the volume contains a number of valuable, independent contributions. 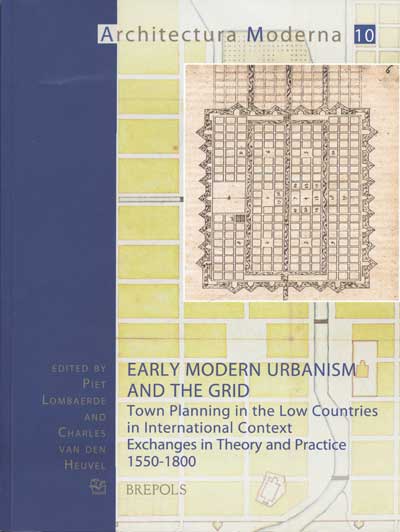 The best articles are those that question the grid as a practical tool, as a symbol of control: approaches that study the grid in a specific historical context, and put its significance for early modern architecture into perspective. The opening article by Werner Oechslin deals with these issues in an exemplary way. Oechslin focuses on rectilinarity through a discussion of Henry Wotton’s writing on ‘plaine compilements, and tractable materials’ and architecture as reasoned activity. He traces the dividing of cities into streets and quarters back to the figure of Hippodamus (as recorded by Aristotle), and reveals this to be a question that underlies much early modern thought on the city, especially about whether architecture and urban planning are capable of addressing and facilitating society’s requirements. A geometrically regular city plan had many practical advantages, but a complex society does not necessarily conform well to geometrical ordering. By his thorough re-reading of contemporary treatises, Oechslin contributes significant nuances to architectural history’s dominant interpretations of the ‘ideal city’ in the context of the early 20th-century invention of the discipline of urban design. Only at that period, when the architect’s role was inflated to that of a creator of Stadtbaukunst, beyond merely serving society, were the grid and the regular city plan mythologized and detached from their historical context and meaning because of their visual appeal.

Simon Stevin’s posthumously engraved city plan is reproduced on the cover and also appears four times in the volume.1 It had a didactic function, as Charles van den Heuvel demonstrates. His plan was not a blueprint, but rather reflected existing knowledge of urban planning, represented in a schematic way. Grids in general were of little use in the practice of urban design or the planning of overseas settlements. Wim Nijenhuis’ article offers an intriguing, though not very well argued, story of the complex of ideas concerning man and society that were shared by Stevin, Justus Lipsius, and prince Maurice of Orange, known as ‘the Maurice Conspiracy’. The analysis overlooks recent scholarship on Stevin by Van den Heuvel and Heidi de Mare, as well as that of 17th-century mentality by Pieter Spierenburg and Herman Roodenburg; these might have been integrated to counterbalance the predominant interpretation through Foucault and Deleuze (Van den Heuvel 2005; Roodenburg 2004; De Mare 2001; Spierenburg 1991). Tobias Büchi’s article concentrates on one publication, Dilich’s Peribologia (1640), about fortress architecture and its connections to fortification theory in the Low Countries. The author, who has written a dissertation on Fortifikationsliteratur, describes how Dilich applied the same principles and methods Stevin had used, developing them so as to combine the requirements of the layout of the fortress with the city grid (Büchi 2009).

Jochen de Vilder examines the relation of the grid concept to the transformation of existing cities. Focusing on Antwerp, he concludes that important infrastructural improvements to revitalize the city made way for new buildings, such as a new exchange, town hall, and weigh house, and also opened up new spaces and required new roads and passages. The medieval city was therefore made current with the requirements of its new economic prosperity. The argument is superbly illustrated with digital reconstructions of the various projects, demonstrating how 16th-century urban renewal took place without any reference to the concept of the grid. Nils Ahlberg presents a selection from his dissertation on Swedish urban planning, focusing here on the influence of Netherlandish expertise. Because large areas of the Baltic were under Swedish rule, town planning was an export product, an instrument to enforce order and consolidate power, but developed under constant consultation and cooperation with foreign experts. With peace restored in 1619, the important harbour city of Götheborg, on the west coast of Sweden, was rebuilt on a location to the south, with the aid of specialists from the Netherlands, the largest group of foreigners employed there during these years. An appendix lists a substantial number of them.

Castrametatio, the principles of planning military camps, and their influences as models and ideal schemes for urban planning, are discussed by Piet Lombaerde, on the basis of books and prints published in the Spanish Habsburg circle of influence. He traces the interest in Habsburg Spain in the latest developments on military architecture and urbanism in the Netherlands. Lombaerde suggests that this was stimulated by a need ‘to realise a more systematic and modern approach to organising and developing the engineering corps in a more academically responsible manner’ (p. 130). He demonstrates this with a survey of publications that found their way to the Iberian peninsula, and discusses military academies in Madrid, Brussels, and Barcelona. He reveals the influence of models from the Low Countries in the Iberico-American world, and devotes special attention to Juan Ramon Coninck’s projects for Lima (Peru). An appendix for further research, of military engineers from the southern Netherlands in the service of the Spanish, mostly Jesuits with special training in mathematics, completes this valuable contribution.

The central question of Jesús Escobar’s article is whether one can speak of an urbanismo austrìaco in an analogy of Habsburg architecture to the estilo austrìaco. He analyzes the grid, the buildings imposed, and the resulting public spaces, and argues that the Plaza Mayor would be the most recognizable place to find traces of the Habsburg hegemony. At the same time, the use and application of building materials suggests a ‘fluid transmission of the estilo’ (174), in which the Netherlandish role was one of many. Christopher Heuer, focusing on New Amsterdam, briefly examines the grid and other European designs and plans that were transformed overseas. He uncovers the discrepancies between the planning and its representations on paper, by referring to Stevin’s interest in processes of organisation, rather than the (geometrical) form of a city. Thus Heuer adds an extra dimension to the formalist approach underlying the basic idea of Early Modern Urbanism and the Grid, using as a way to apprehend the unfamiliar and the new, and to represent order.

The two last contributions seem out of place in a volume on the Low Countries, but in their distinct approaches to North American urban planning and the grid, they are worthwhile ‘extras’. Neil Levine focuses on the evolution from the grid as an18th-century authorised by the federal government in 1785 and re-established in the Land Act of 1796 to its revival in the late 19th century, with Frank Lloyd Wright’s quadruple block plan that corresponds with the original grid of the 1785 Ordinance. In the concluding article, David van Zanten returns to Chicago and to Louis Sullivan, who approached the grid as many late 19th-century and early 20th-century architects did — as a consequence and condition for the urban architecture and planning of the Grossstadt. Sullivan’s method of design was highly influenced by his discovery of a geometrically dominant template; the Wainwright building (Saint Louis, 1890–91) was his most elaborate solution.

Since the late 19th century, we have been automatically seeing a grid and reading such geometry in a modern way; however, it is important to remember that such reading may differ from the early moderns. To them, ‘the grid’ was not necessarily evident, nor was ‘grid’ understood in the same way. However, we learn little from this volume about this paradigmatic shift or the discussions it must have aroused among architects, planners, politicians, and rulers. How art historians, architectural historians, and historians of cartography and geography, of mentalities and philosophy, might discuss these issues certainly warrants further study. In the quest for the grid, in the tracing of it as a formal shape and as practical geometric device and image in books, prints, and maps, this book gathers various interesting contributions, but it also uncovers many questions remaining to be considered.

H Roodenburg, (2004).  The Eloquence of the Body: Perspectives on Gesture on the Dutch Republic. Zwolle: Waanders.

This article has not been peer reviewed.