Since the death of Lucius Burckhardt in 2003, his work has been discovered as an alternative position in architecture and planning in the German-speaking world. This volume for the first time compiles 24 ‘best of’ texts on such topics as politics, landscape, and design, written between 1957 and 1999, in an English translation, including a valuable introduction by the editors.

‘Who plans the planning?’, ‘Why is landscape beautiful?’, and ‘Design is invisible’ — these are just three of the partly naively questioned, partly paradoxically argued theorems that were coined by the Swiss sociologist and economist Lucius Burckhardt (1925–2003), a renowned architecture and planning critic in the German-speaking world. Since the 1950s, Burckhardt had worked as book author, as editor of the Swiss architectural magazine Werk, as university professor at the Ulm School of Design, the ETH Zurich (inventing the format of the ‘Lehrcanapé’, a team-taught, project-oriented seminar) and the University of Kassel (Blumenthal, 2010), as chairman of the Deutscher Werkbund, or as dean of the Bauhaus University in Weimar, when it was newly founded after the fall of the Berlin Wall, to name just a few stations of his career. Regularly expressing himself in print, Burckhardt presented himself as a veritable polymath, writing on such topics as politics, landscape, and design, thus sharing his knowledge, and continually engaging in current debates.

Martin Schmitz, a former student of Burckhardt’s in Kassel, had initially set himself the task of re-publishing three comprehensive thematic compilations of Burckhardt’s essays on planning policy, landscape theory, and design education. The texts were released through his own small-scale Berlin-based publishing house, and edited in collaboration with experts on the topics. Now Schmitz has edited another volume of texts, titled Lucius Burckhardt Writings: Rethinking Man-Made Environments, co-edited with Jesko Fezer, and published by Springer. For the first time a selection of texts by Burckhardt is made available to an international audience, in an English translation by Jill Denton. 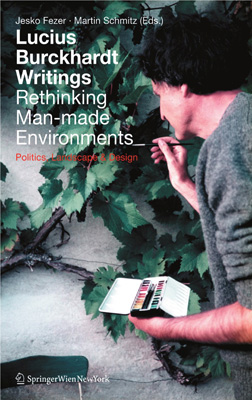 From the three previous publications, Fezer and Schmitz have compiled 24 ‘best of’ texts, written in the period 1957 to 1999, that include different formats, from newspaper articles to essays and even a sermon, addressed at various audiences, professionals and laypersons alike (Burckhardt, 2004; 2006; 2012). The compilation includes the key texts on the aforementioned aphorisms. Furthermore, several texts on ‘strollology’ are included, a discipline of its own, which Burckhardt founded in the early 1990s, based on the postulate of a deceleration of perception (and a criticism of automobility, also with regard to the urban fabric), and in which he integrated all of his former approaches. The limited but concise introduction to the publication provides a summary of Burckhardt’s intellectual biography. The editors contextualize the texts in chronological order, in the author’s biographical, though professional and institutional, history.

The carefully edited publication is a good introduction to Burckhardt’s diverse fields of interests as well as to the crucial debates in the disciplines of architecture and planning in the post-war era. It is remarkable how Burckhardt, owing to his broad interests and critical mind, was continuously involved in contemporary debates, beginning with the book projects Wir bauen selber unsere Stadt and achtung: die Schweiz, which he co-edited, together with Max Frisch and Markus Kutter (Burckhardt and Kutter, 1953; Burckhardt, Frisch, and Kutter, 1955). He commented on urban planning and infrastructure of the 1950s and ’60s, on the alternative and critical debates of the 1970s, on architectural education and academic policy in different locations, etc. In doing so he re-imagined a truly democratic process of planning. Texts such as ‘Design is Invisible’ (1980) demonstrate that Burckhardt, referring to Ivan Illich’s critique of technology and growth, Tools for Conviviality, was committed more to the convivial qualities than the destructive powers of objects, as he took architects in their social responsibility seriously (Illich, 1973).

Burckhardt was a real translator. As a committed and politically active individual he frequently referred to theoretical and philosophical positions from the Anglo-American context (see index of names), translated them into a different cultural context, and in so doing applied them to urgent problems from a European perspective. Focusing on the socio-economic dimensions of the profession, he started from a procedural rather than a formal notion of architecture, foregrounding the participatory and interactive aspects of planning and building, and also paying attention to their conditions and effects. This new publication now allows a re-reading of Burckhardt, because it illustrates the extent to which he referred to English-language debates.

Despite the limited space of the book, and given Burckhardt’s enormous output, some topics could have been examined more clearly in the selection, for instance his urban criticism. In particular his contribution with regard to a genealogy of the debates on sustainability, such as in the essay ‘Landscape and Social Structure’ (1977), would have illuminated Burckhardt’s work. The essay was written at a time when the author, working with concepts such as ‘nature’, ‘environment’, and ‘landscape’, increasingly turned to environmental issues, before he became, in the mid 1980s, an early critic of ‘ecology’ as a fashionable phenomenon. A previously unreleased version of ‘The Minimum Intervention’, in which Burckhardt developed criteria for a cautious, responsible, and sustainable architectural practice, which still have their validity, has also not been considered (Burckhardt, 2013).

Burckhardt’s texts are a pleasure to read, also in their English translation. But beyond that, they are meaningful and highly relevant today in several respects. For historians, his work helps provide a better understanding of many of the architectural and planning debates in Europe, especially in Germany and Switzerland, as well as the higher education reform of the 1970s, the emerging institutional critique, or the contemporary art of gardening and landscape art. For theorists, Burckhardt’s work contributes to a historical awareness of the current debates on participation, pedagogy, and sustainability, but also of contemporary interdisciplinary, socially and culturally oriented approaches in architecture studies, such as on topics like ‘dirt’ and ‘wasteland’. And for practitioners, Lucius Burckhardt Writings provides important foundational texts for all those who are passionate about alternative approaches in planning and architecture.

For those who would like to learn more about current research on Burckhardt, a Lucius Burckhardt Convention will be held at the School of Art and Design in Kassel in May 2014: