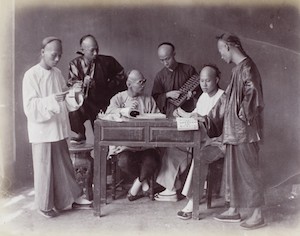 Comprador Networks and Comparative Modernities
The comprador classes of the 19th- and early 20th-centuries were critical agents of global capitalism. As “middle men” in the colonial enterprise, they enabled the development of imperial trade networks, negotiated the supply of labor that extracted profit from the local landscape, established new patterns of consumption and taste, and facilitated cultural as well as economic exchanges that were critical to the growth of Asian cities. In diverse treaty ports and colonial entrepôts like Singapore, Batavia, Shanghai, and Hong Kong, compradors drew on a diverse vocabulary of intra- and trans-regional architectural forms, labor, materials, and construction techniques to build homes, offices, godowns, factories, and infrastructural networks that were legible to both European corporations and local populations. The travelling, sojourning perspective of the comprador allows historians to critically examine the fractured, multi-scaled geographies at play across global networks as well as what Raymond Williams has described as “the metropolitan interpretation of its own processes as universals.” The articles in this collection create an understanding of treaty ports and colonial cities not only as sites of local and foreign interactions but as incubators of new ideas about architecture and modernity in the global capitalist economy.

Modernizing Macao, the Old-Fashioned Way: Macanese and Chinese Entrepreneurship in the Colonial City, 1877–1884

Sugar and the City: The Contribution of Three Chinese-Indonesians to Architecture and Planning in the Dutch East Indies (1900–1942)

The Colonial Port as Contact Zone: Chinese Merchants and the Development of Godowns along Singapore River, 1827–1905